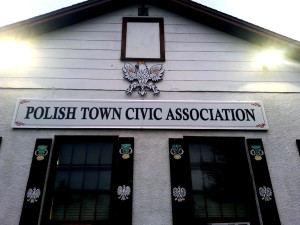 In 1975, Riverhead Town was planning various celebrations for their Bicentennial.  A committee was formed to represent Polish Town, something that previously had never been done.  From that group came the birth of a permanent organization called The Polish Town Civic Association.  It’s purpose would be to promote and beautify Polish Town and renew its spirit.  Their ultimate goal would be to turn Polish Town USA into an ethnic showplace.

Members would turn out on weekends to sweep and clean Pulaski Street, mow grass, and plant flowers in newly installed wooden boxes along the street.  Land was donated to build a Mini Park across from St. Isidore’s.   Today – a stone marker, flagpole, and a beautiful European style street clock enhance the streets of Polish Town.  But all of this would take money and the organization found themselves looking into fund-raising projects.
All moneys raised by sponsoring the Fair and Festival and other events throughout the year are poured back into the promotion and development of Polish Town USA.

In the summer of 1978, the Association began the transformation of Polish Town USA into an authentic European style village. Polish style facades were put up in front of the buildings – designed with peaks and cones to resemble stucco and wood. The members designed wychianki patterns and painted them on wooden shutters to be hung on the stores and homes in the area. This colorful Polish folk art included intricate geometric patterns, flowers, and scenes from people’s daily lives. Hanging baskets and ornamental trees were placed along Pulaski Street. Signs were also made indicating merchant’s wares in the Polish language. New street signs were designed with a Polish eagle indicating a different area. As an added touch, mileage signs to the main cities in Poland were placed throughout the area. These signs have become a visual identification for Polish Town USA and fascinate the many visitors who come each year.

In 1979, the association decided to establish a genuine headquarters within Polish Town. An old dilapidated building and surrounding land was purchased for $35,000. Bonds were sold and money was raised to renovate the building. Along with countless volunteer hours, a beautiful landmark Chalet Headquarters opened its doors in 1983.

Since 1980, the annual Polish Dance Festival, held in conjunction with the Street Fair, took place in a huge tent across from the Chalet headquarters. This area, referred to as Polonaise Park, was leased for other events too, such as jazz festivals, ethnic events, and Riverhead Town functions. In 1993, the land owner offered one half of the parcel for the PTCA’s use and was to sell the other half to a developer. The Association knew this was an important parcel for Polish Town, and half would not be sufficient. After many months of negotiation, the land was purchased on May 19th, 1994. Since then, Polonaise Park has been completely renovated with the the addition, this year, of a brand new open pavilion.